What is DoD SBIR? The Brighton Science Success Story

As early as 1998, Brighton Science has worked alongside the federal government to advance the science behind the handheld and automated Surface Analysts. Now offering consulting services to customers around the globe, when Brighton was first up and coming in the adhesives and coatings business world, the Small Business Innovated Research (SBIR) programs helped pay the bills. Soon enough, the grants would become merely supplementary funding to the already booming contact angle technology and consulting direction the company took on in the early aughts, up till today. We sat down with Founder and Chief Scientist Giles Dillingham, PhD., to discuss the SBIR programs and how they've helped transform the Brighton Science brand into a thriving company.

What is the Small Business Innovated Research Program (SBIR)?

According to the official website, SBIR grants stimulate high-tech innovations while, “the United States gains entrepreneurial spirit as it meets its specific research and development needs.” Brighton Science’s purpose hinges on advancing materials science and the SBIR programs mirror that purpose. The program was created as a way to focus on Research and Development, something companies with business-minded leaders tend to forgo. With little experience working in manufacturing or the process of developing a product, a lack of funding leaves research and development phases in the dust and the latest scientific advances in the 1980’s. The United States government recognized that trend and devised a plan keep scientists, engineers and physicists working for U.S. companies, created the Small Business Innovated Research program.

What is Involved in Applying for a SBIR Grant?

To apply and be granted access to the program and all its perks is not an easy feat. Small businesses must adhere to a set of criteria to qualify for a SBIR grant including being organized for profit, stationed in the U.S., more than 50% owned and controlled by either a resident of the country or a permanent resident alien, and no more than 500 employees. The grant program was established back in 1982 and has since been reauthorized and extended multiple times by the United States government. In total, nearly 180,000 awards have been given out, totaling more than $54.3 billion in funding.

“Brighton Science is a success story for the SBIR program... We have done what it was designed to do.”

Nearly two decades later, building the company alongside the government with the help of each program and its funding, Brighton not only developed and started selling its first ideation of the surface angle technology, but the company also grew from 4 employees in a garage to nearly 50, with millions in sales.

Brighton Science is an Example of an SBIR Program Success Story

“We are one of the U.S. Government’s experts in Materials Science,” Dillingham confidently stated.

Brighton Science is unique with its application of knowledge. The company boasts influential and game-changing technology like the Surface Analyst but edges out the competition by providing customers consulting expertise in the world of contact angle measurement and materials science. The work is considered “high risk, high reward,” by Dillingham, which can pay off in the long run and provide high-level research that solves a variety of customer problems in a multitude of industries.

“We do academic-quality research within the confines of a small company. We’ve been able to do that, largely because of the way we’ve leveraged the SBIR program," says Dillingham.

While similar competitors sell a product and stay more hands off after distribution, Brighton Science takes their technology and shows customers how to use it and what it can do to help reduce material waste, improve productivity along all lines of the product life cycle and decrease embarrassing mass public recalls, among other things. By partnering with other companies, Brighton utilizes the SBIR grant work to improve competitive quality of each partnership by way of the Surface Analyst or contact angle comprehension. This not only builds up relationships between companies, but it keeps Brighton Science experts focused on developing the science instead of focusing on the technology – a core purpose of the Small Business Innovated Research program.

Watch this video to see how Brighton Science (formerly BTG Labs) worked alongside the Air Force using an SBIR contract to revolutionize the way aircrafts are built and manufactured.

Recently, Brighton scientists are applying within the SBIR program under a National Science Foundation (NSF) grant with the United States Air Force to improve the reliability and manufacturability of adhesively bonded aircraft structures. The goal? Taking the technology and whatever is learned during the scientific processes to then commercialize that knowledge for Brighton’s trusted partners and customers to utilize in other industries as well, like medical fields or throughout the automotive industry.

“Work in surface analyst technology gives us another level of awareness about surfaces that doesn’t exist anywhere right now.”

Dillingham states, one of the most helpful aspects about working under an SBIR grant is the access to government materials and expertise which helps Brighton Science workshop new ideas which can later be passed on. Regardless of what problem the grant was dedicated to solving, the same lessons learned can be put toward creating a new product that gives customers more solutions.

Transitioning Brighton Science from Small Business Innovation Research projects to more large-scale projects is an ongoing process. For now, the grants give Brighton scientists the ability to advance unique technology - i.e., the Surface Analyst - without incurring debt. “We don’t depend on [SBIR grants]. They aren’t our whole company,” Dillingham thoughtfully states. 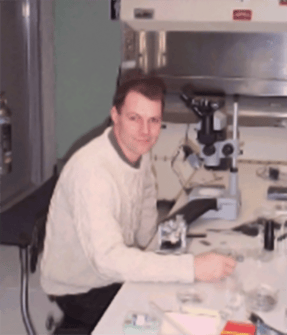 Giles working on water contact angle development in the lab

And the proof is in the finances.

While at first, each SBIR grant gave Brighton Science, then just a small business in a garage, the initial funding it needed to advance the science, but now the program runs parallel to other business endeavors with big-name companies like Honda, Google, and Ford, among many others. But no matter how domineering Brighton Science becomes in the field of materials science, it is Dillingham’s altruistic hope that the driving force within the company is a dedication to the scientific process will always keep them one step ahead of the competition.

To learn how you can leverage surface science and contact angle in your manufacturing operations to decrease risk and control material surfaces, download the eBook, “Predictable Adhesion in Manufacturing Through Process Verification."