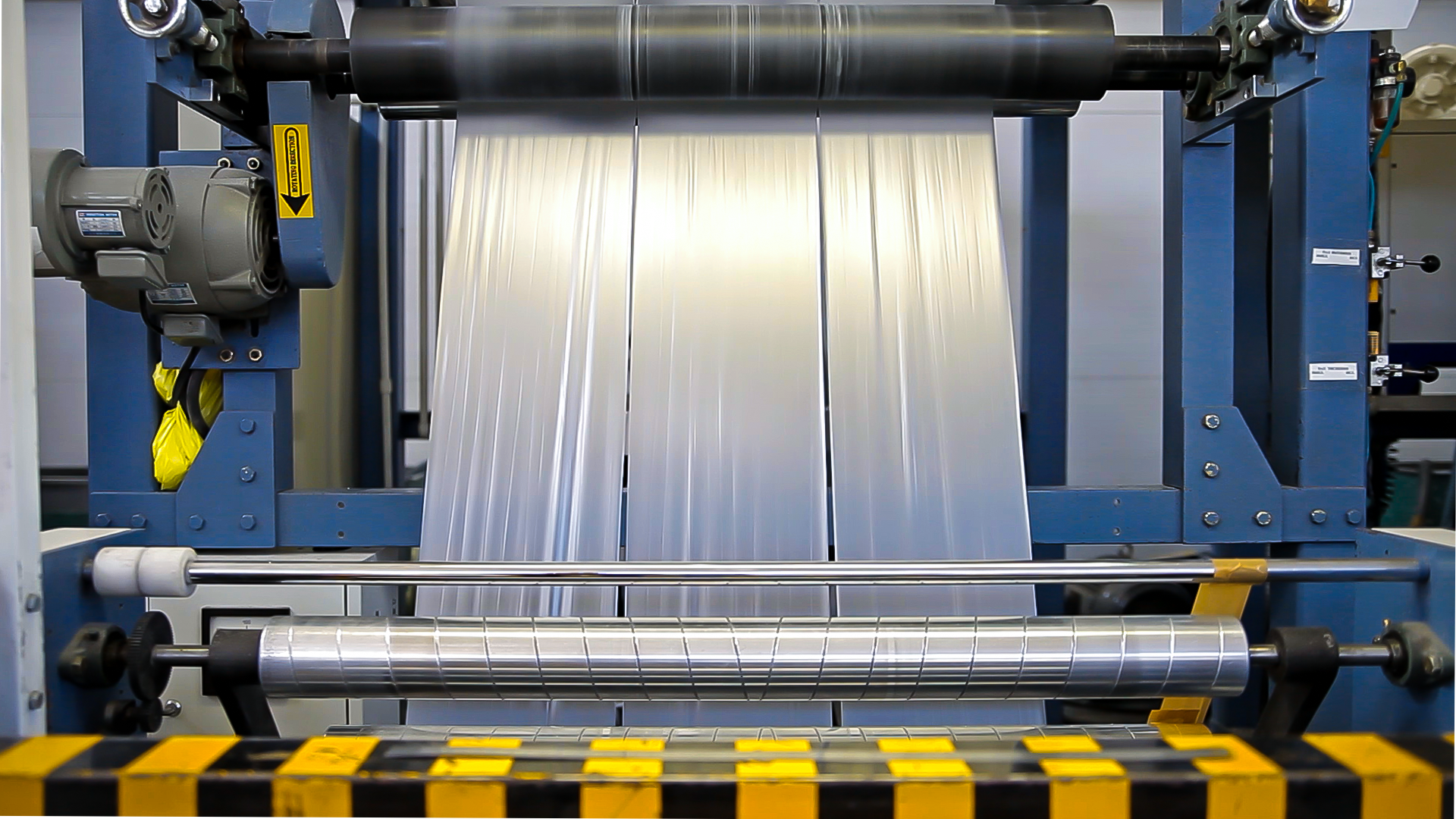 The Dangers of Missing Vital Surface Quality Information in Production

A major problem for manufacturers is a problem of sensitivity. There is a rampant lack of sensitivity to material surfaces for companies across every manufacturing industry. Granted, it’s not easy to test surface quality to predict the outcomes of common manufacturing processes like adhesive bonding, structural sealing, metal brazing, polymer adhesion, printing, painting or coating. To be able to form a bond between two substances (i.e. glue and metal, plastic and plastic, paint to metal, ink to film, etc.) the materials need to have the proper chemistry at the top few molecular layers of their surfaces.

As a part of a complete quality assurance process, monitoring the chemical state of material surfaces is essential to ensuring the final product meets performance demands. But it’s something companies are struggling to do and do well.

The struggle comes from the fact already mentioned, that testing for contamination at the molecular level can be daunting and difficult to implement, especially on the production line where that information is most crucial.

To illustrate the frustration many manufacturers face with molecular-level contamination causing enterprise-level disruption, we’ll take a look at a major packaging company who was having trouble with a heat sealing process and how they overcame it.

What’s the Difference Between “Good” and “Bad” Material for Manufacturing?

The company was having intermittent problems heat sealing a polymer film used to package paper products. Essentially, the seal wasn’t reliably staying sealed and this was causing real headaches for the customers that this company, rightly, doesn’t want to disappoint.

The company was able to discern that there was film that failed performance tests and film that held a strong seal. The trouble remained though, because the quality tests they were running were unable to tell the difference between the two. They seemed equivalent in every way, according to their findings. Yet, the seals kept failing.

They knew that the film looked identical so they deduced that the problem must be something invisible to the eye on the surface. To try to find out if there was anything detrimental present on the surface they used a very common surface analysis technique called dyne solutions.

Dyne inks consist of a series of liquids having a range of surface energies. The various surface tensions in the inks are created by mixing two or more mutually soluble liquids of different surface tensions in different proportions. Commercially available mixtures include ethanol and water or formamide and 2-ethoxyethanol. Usually a blue or purple dye is added to the mixtures to improve visibility on the surface.

Furthermore, because dyne inks are solvents, they clean contaminants from the surface during measurement and therefore frequently do not detect them.

That was the problem this company was running into. The dyne pens showed no differences between a “good” film and a “bad” film. For the purposes of this article we are just referring to the films as good or bad based on whether they sealed correctly or not.

Brighton Science took a look at what the dyne inks were doing to the surface and found that they cut through a contaminant found on the surface of the bad films, leaving the packaging company with a false sense of security. These false “all clear” signals from the dyne ink tests inevitably led the company to scramble to understand why they were disappointing their customers.

How to Detect Invisible Differences in Surfaces

When Brighton Science analyzed the good and bad films, water contact angle was the first tool we used to baseline the differences between films. 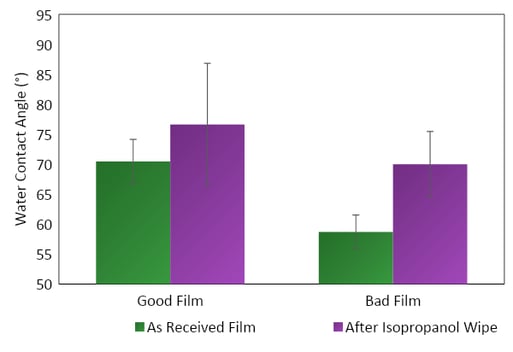 Figure 1. Water contact angle measurements on known good and known bad films before and after a wipe with isopropanol.

The contact angles of the films increased with the isopropanol wipe indicating that whatever was causing the bad seal is soluble in the isopropanol and the films were brought to a similar state of energy after the wipe.

The films were then analyzed using infrared spectroscopy. Brighton Science was able to remove various substances from the films and identified that the bad film contained an amide group that the good film did not have (Figure 2). In the spectra you can see the red line for the bad film has two much higher peaks in the blue box than the blue line for the good film has. Activity within this range indicates the presence of this amide group. 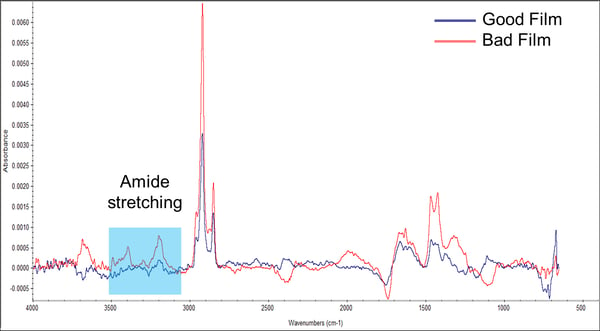 Amide groups are generally hydrophilic (attractive to water) while the polymer film is hydrophobic (water repellant). So, that answered the question of why the bad film had a lower contact angle. The water was wetting out because it was coming in contact with this hydrophilic amide group.

Upon more investigation we found that the contaminating amide group was contained in the film additives. This blown film requires a lubricant, also called slip, in the formulation to reduce friction on the film as it passes through rollers and during the cooling process. These processing aides are known to reduce friction, but can cause challenges for adhesion and heat sealing when present in excess. The slip molecule, a fatty acid amide, contains an amide group, which was identified through chemical analysis. This was present on the bad films, not the good films.

The typical state of the good film before treatment was that of a fairly low energy surface with contact angles in the 70’s. Corona treatment is required to bring those contact angles lower and increase the surface energy so that the film will seal properly. When the film is being treated, it needs to slide smoothly and effortlessly over the rollers that send it through the machinery.

Slip reduces the coefficient of friction of the film so it makes the journey over the rollers freely and prevents any gunk from building up on the rollers that can stick to rollers. Hot polymers tend to stick to metal rollers used during the blown film process. If the slip was not present then the rollers could require additional cleaning, they could transfer unwanted substances onto the film and if there are almost imperceptible catches in the film on the rollers then there could be tiny creases in the film that won’t get treated and lead to similar sealing failures that this packaging company was seeing. So, slip serves a very important purpose, but in excess, it can be detrimental to sealing.

Where do Contaminants Come From?

There are several reasons why excess slip could appear on the surface of a film. There may have been too much slip added to the film formulation of this packaging. There could have been leftover slip on the rollers from a previous batch of a different kind of film. Temperature changes in the production facility could have an impact on the slip molecules’ behavior.

A hot day can cause more slip to migrate to the surface because when polymers heat up the molecules become mobile and substances that are supposed to stay in the bulk of the material can make their way outward. Similarly, yet not as common, temperatures that are too cold can cause what’s called phase separation to occur between the slip agent and the rest of the polymer. Think of when you put homemade soup in the fridge and the fat within the bulk of the soup solidifies at low temperatures and makes its way to the top of the soup. That happens because the fat has phase separated from the water. When the soup is heated back up for eating, the fat molecules disperse back into the rest of the soup.

No matter the cause of the excess slip, the film manufacturer now has a way to measure and monitor for it because it can be found using water contact angle.

Slip is soluble in alcohol and many other solvents, including those found in dyne pens (Figure 1). In this case, the dyne pen ink could not indicate the presence of slip because it dissolved the ink. However, slip, while somewhat hydrophilic, is not very soluble in water, and so water could react to its presence without dissolving it. Using water as the probe fluid (as scientists refer to it) the test was able to be sensitive to what was actually happening on the surface of the film.

We were able to help this film manufacturer use contact angle measurements to monitor excess slip in their process. When you inspect surface quality with this method at all the places where contaminants, like slip, can cause problems or where they can be dealt with then you can tackle the variables that are causing friction (of a sort, in this case the slip was reducing friction but increasing emotional and economic distress). We call these problems areas Critical Control Points.

Measuring at your Critical Control Points, such as directly on the rollers, allows manufacturers to discover leftover slip residue between batches. Measuring before and after treatment lets you know when to change corona treatment levels to change slip migration. Measuring in various temperatures can determine when a hot day of production is too hot for slip migration. Measuring the surface quality of incoming materials gives you the opportunity to catch variations so you can add a cleaning step for “bad” materials if necessary or hold your suppliers accountable for inconsistent parts.

Using contact angle measurements to investigate potential causes for excess slip or the presence of any contaminant detrimental to building reliable products can be the difference between having satisfied customers and having frustrated clientele.

To learn more about implementing quality control methods that secure your manufacturing process from start to finish, download our eBook about root cause analysis. This free guide is a great resource for beginning your own investigation into problems that don’t have obvious solutions. Get your copy today, Checklist: Adhesion Failure Root-Cause Analysis for Manufacturers

The Benefits of Benchmarking Surface Quality in Manufacturing

What is Materials Science & Why is it Crucial for New Product Development?