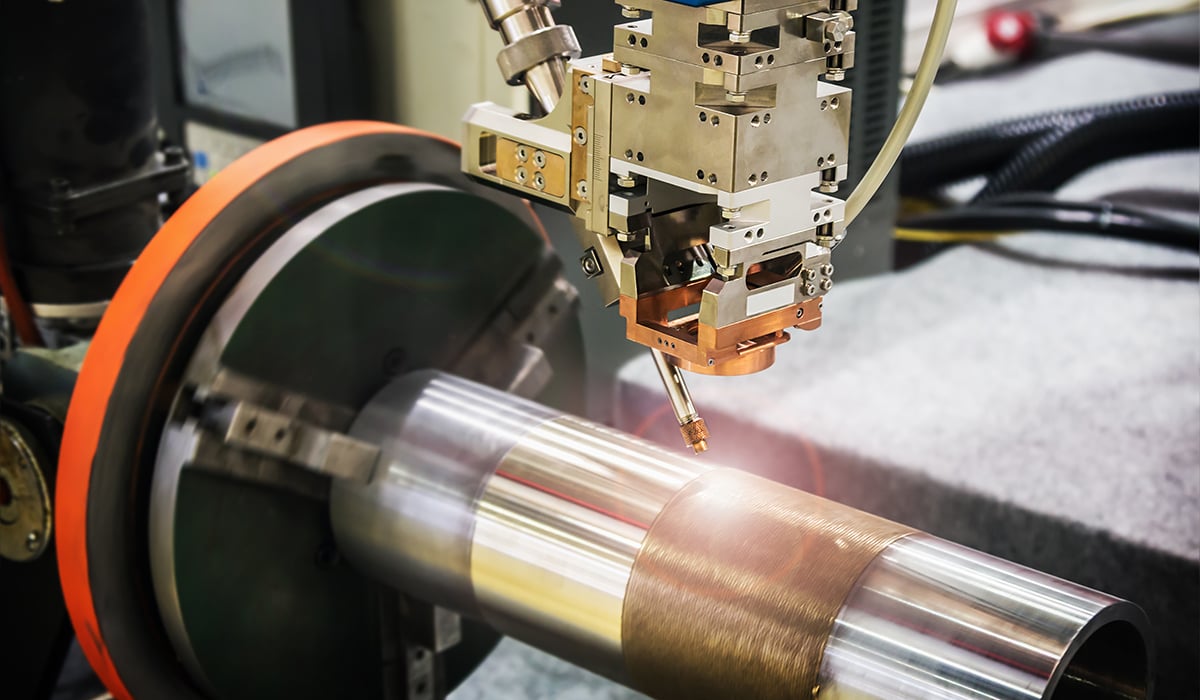 3 Things You Need to Know to Create Strong, Reliable Bonds With Laser Cleaning

Manufacturers are always looking to create stronger, more durable, more reliable and, in the automotive and aerospace sectors, lightweight products. In this pursuit they’ve often upgraded and swapped out material systems for metal alloys that have lower density, better temperature tolerance and corrosion resistance. This is how they gain a competitive advantage in the marketplace.

Actually, that’s only half the story.

A more powerful strategic advantage is to have quantifiable certainty of the strength, durability and reliability of your products.

Swapping out older materials for stronger ones can be a good start, but this can also require new assembly processes that have a higher reliance on surface preparation and cleaning in order to create strong structures. Metals like aluminum alloys and advanced materials like carbon fiber polymer composite, which are commonly used in automotive and aerospace manufacturing, need to be adhesively bonded to reduce weight - which is added to structures when fasteners are used - and create more dependable joints.

Traditional surface preparation techniques for aluminum include grit blasting, solvent wiping followed by abrading (with a scouring pad), or anodization. Adhesive bonding opened the door for more automated processes which these legacy surface treatments just aren’t that compatible with.

Anodization is more commonly seen in aerospace applications where this more expensive and rigorous preparation is used to meet stringent specifications. Inherent variability in grit blasting and manual abrasion techniques made it clear that a more controlled process was in order.

Laser cleaning, or laser ablation, stepped in to fill this process gap as a much more precise, environmentally-friendly, automated and effective method of treating metal and composite surfaces for bonding. The types of contaminants found on the surfaces of these materials are easily blasted away with laser treatments.

Because laser cleaning is so powerful, it’s vital to understand exactly what effect it is having on your surfaces. The difference between a properly treated surface and one that is under or overtreated can be extremely difficult to assess. With quantitative treatment validation techniques that are as sensitive and precise as laser treatment itself, manufacturers can be confident their metal and composite surfaces are completely ready for bonding.

1 - What is Laser Cleaning?

Laser treatment is an extremely precise, thermal cleaning technique that works by removing (ablation) tiny fractions of a material surface through a focused, often pulsed, laser beam. The laser irradiates the surface to remove atoms and can be used for drilling extremely small, deep holes through very hard materials, producing thin films or nanoparticles on a surface.

To learn more about how to optimize your laser treatment or other cleaning techniques, download our eBook, Predictable Adhesion in Manufacturing Through Process Veriﬁcation.

In the looping video you can see just how significant the difference between a treated and untreated surface can be. The video shows an aluminum clutch assembly being cleaned via laser treatment blasting off oxides and other contaminants to create an extremely clean and bondable surface.

This surface cleaning process is so effective because of its ability to target such small layers of contaminants and residues. Aluminum surfaces contain oxides and lubricant oils that are detrimental to the adhesive joining and composites often retain residual mold releases and other silicone contaminants that can’t form strong chemical bonds with adhesives.

When an adhesive is applied to a surface with one of these residues present it will try to chemically adhere to the oils and silicone at the top few molecular layers of the material. These bonds are extremely weak and will inevitably fail either during performance tests or during use of the product. When joints break at the point where the surface and adhesive or coating meet this is called an interfacial failure. Cohesive failure during lap shear testing is when the break happens within the adhesive itself. This is indicative of a very strong bond and an assembled structure that is resilient and long-lasting.

Cohesive failure of these composite samples that have been laser treated shows the adhesive on both sides of the materials being bonded.

Interfacial failure of these composite samples that were not treated shows that the adhesive only stuck to one of the sides and completely let go of the other.

When you have cohesive failure, you have an interfacial bond that isn’t letting go for nothing. Surface treatments aim at modifying the surface to remove contaminants and create or reveal a surface that will be able to chemically fuse with the adhesive for durable and reliable bonds.

2 - Why Use Laser Cleaning?

There’s been lots of great research on the ways laser surface treatment improves adhesion. For instance, a paper published in the Journal of Adhesion explored just how much joint strength is enhanced by laser cleaning as opposed to the traditional methods.

“Experimental results indicate that preadhesion laser surface treatment significantly improved the shear strength of modified-epoxy bonded aluminum specimens compared with untreated and anodized substrates. The best results were obtained with laser energy of about 0.2 J/Pulse/cm2 where single lap shear strength was improved by 600-700% compared with that of untreated Al alloy, and by 40% compared with chromic acid anodizing pretreatment.

The mode of failure changed from adhesive to cohesive as the number of laser pulses increased during treatment. The latter phenomenon has been correlated with morphology changes as revealed by electron microscopy, and chemical modification as indicated by Auger and infrared spectroscopy.”

Another interesting effect of laser ablation is the power it has to create a surface that doesn’t degrade over time.

Adapt Laser Systems has done great work looking into how laser cleaning interacts with surfaces in some surprising ways. Laser treatment of aluminum creates tiny craters in the surface that melt and almost simultaneously solidifies into a microcrystalline layer on the surface that is even more corrosion resistant than the aluminum itself.

Looking at the chart below, it shows the difference between the shear strength of a bond using aluminum that has been laser treated and aluminum that has been chemically treated. Over time, as the surfaces have been exposed to a moist environment, the ability of the chemically treated surface to bond well decreases significantly because the moisture begins to corrode the surface, while the laser treated surface retains its corrosion resistance after weeks of exposure. 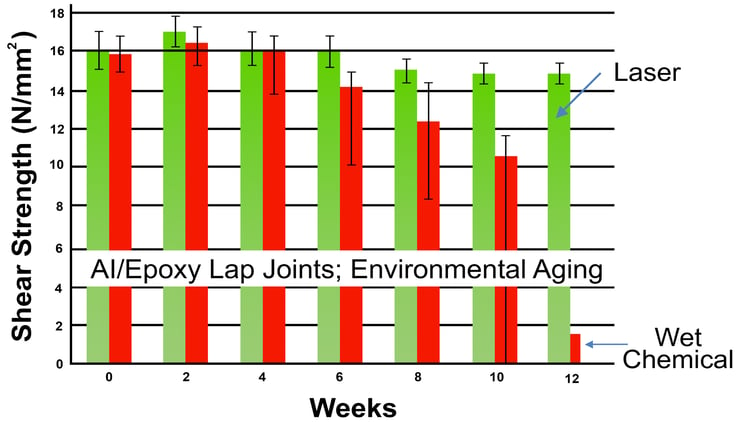 It’s important to be aware of the effect the type of materials you’re treating has on the surface durability. Not all laser treated surfaces last as long as the aluminum in the chart above.

Titanium laser treated for an aerospace wing structure application had a very different outcome. In a 2004 study published in the International Journal of Adhesion and Adhesives discovered that:

“...mechanical testing does reveal that a durable bond can only be provided if an epoxy primer is applied after pretreating the titanium. Contact angles measured after surface treatment were shown to be significantly less than that for the untreated surfaces but were also shown to increase with prolonged storage of the treated sample under ambient conditions. Therefore, emphasizing the importance of bonding or primer application within the immediate hours after the surface treatment.”

What is a contact angle? Contact angles are measurements of how a drop of liquid behaves on a surface as it interacts with contaminants and residues on the material surface.

Contact angle measurements, like the ones mentioned in the IJAA paper used to understand the degradation of treatments overtime, are an exceptionally good way of monitoring and verifying laser cleaning processes.

A contact angle measurement is sensitive to the molecular changes that are occurring on a surface being laser treated. The drop of liquid placed on the surface will rise or fall in exact relation to the amount of microscopic contamination on the surface. Contact angle measurements are a relentless indicator of adhesion and can offer clarity and visibility into how aligned the strength of the treatment is with the cleaning needs of the materials.

For instance, the chart below (from a report generated by NASA and Brighton Science scientists in the Journal of Applied Spectroscopy) shows a surface that has been exposed to silicone. Using laser induced breakdown spectroscopy (LIBS) to determine the silicone to carbon ratio (shown on the Y axis) the chart shows how the increase of the laser strength (shown on the X axis) brings that ratio down and at about 100 milliwatts of power and the surface is essentially free of silicone.

Contact angle measurements correlate beautifully with the changes in contaminant levels picked up by spectroscopy methods. Most precision measurements of contaminants on surfaces are done with equipment that isn’t feasible for manufacturers to purchase and couldn’t be used on real parts actually being manufactured anyway.

Strength performance tests only examine a sample of the materials being processed, adding to scrap rate and not giving any indication of how to create a stronger bond. Contact angles, when employed throughout a production line can point to exactly where the process requires tweaking, and can provide insight into what needs to be tweaked and to what extent.

To learn more about how to optimize your laser treatment or other cleaning techniques, download our eBook, Predictable Adhesion in Manufacturing Through Process Veriﬁcation. This book breaks down everything you need to know about how to look at surface quality through a new lens and build products that are more reliable than ever while also increasing your throughput and decreasing costs.

What is the Difference Between Surface Free Energy and Surface Energy?