A contact angle is the angle established between the perimeter of a liquid drop and the surface it rests on.

Because contact angles depend on the interaction of the liquid with the surface, they can be used to calculate thermodynamic properties of a surface such as the surface free energy. 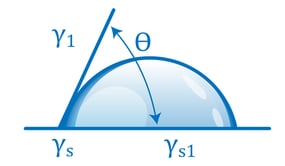 Contact a Surface Analyst Expert today to learn more about our expertise, technology, and other services:

The angle formed as a liquid slowly advances over a surface. (Here, ‘slowly’ means slow enough that the liquid viscosity doesn’t affect the contact angle). This is the largest angle that is thermodynamically possible.

The angle formed as a liquid slowly recedes over a surface. This is the lowest angle that is thermodynamically possible.

This is the difference between the advancing and receding angles.

What is a Hydrophobic Surface?

What is a Hydrophilic Surface?

It’s conceptually easy to understand how contact angles are related to the interaction of a liquid and a solid surface. First of all, it’s important to remember that all molecules attract all other molecules to one degree or another. Counteracting the attraction between atoms is thermal energy, which causes all molecules to vibrate and push each other apart. Substances that attract each other only weakly (like nitrogen or helium) exist as gases: the thermal vibrations overwhelm the weak attraction. Substances that attract each other more strongly (like water or oil) pull themselves together to form a liquid. If the attractive forces are strong enough, the substance will form a solid, like a metal or paraffin wax.

These attractive forces exist within and between all materials. These forces are why a droplet of water in the air forms a sphere: the net attractive force between all the liquid molecules is directed towards the center of mass which pulls the droplet into a spherical shape. 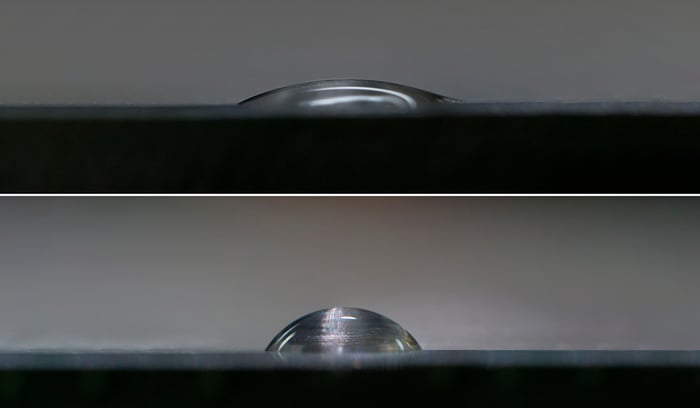 When a liquid drop contacts a surface, there is now the attraction of the liquid molecules to the molecules in the solid as well as to themselves, which tends to pull the drop into a flattened shape. The final shape that the drop forms depend on the balance of attractive forces of the liquid for itself versus the liquid towards the solid surface. If the liquid attracts itself very strongly compared to its attraction for the surface, the drop will ‘bead up’ and form a high contact angle. If the attraction to the surface is strong compared to the liquid-liquid attractive force, the drop will ‘spread out’ and form a low contact angle.

For more information about liquid surface tension, refer to the article, “How to Measure Surface Tension.”

γsl is the energy that’s ‘left over’ at the interface of the liquid and solid after the molecules come into contact and have interacted with each other.

The Young equation reinforced the idea that contact angles and surface energies (or surface tensions) are closely related to things like adhesion (another way of expressing how strongly one thing is attracted to another). They are also related to things that determine the composition of a surface, like cleanliness and surface treatment. By simply measuring the behavior of a drop of liquid on a solid surface, we can use the correlation of that measurement with the surface energy of the solid to give us control over processes to prepare, treat, and clean surfaces for adhesive bonding and coating, both in laboratory and in production settings.

Learn more about the difference between surface free energy and surface energy.

Wettability refers to the tendency of a liquid to spread on a surface. Because it’s determined by the intermolecular forces between the surface and the liquid, it’s closely related to surface energies and contact angles and the Young equation. On a thermodynamic basis, wettability is the difference in energy of the system before and after wetting occurs. We express this with the spreading coefficient S:

If S>0, the lower energy state of the system is the state where the liquid has wet and spread over the surface, and in this case wetting and spreading is thermodynamically favored and will be spontaneous.

Many manufacturing and assembly processes depend on the wetting and spreading of a liquid on a solid surface: an adhesive or coating being applied to a substrate, molten metal joining materials together during brazing and soldering processes, or blood flowing over a strip for medical diagnostic tests, pesticides spreading on plant leaves—the final performance of the products that undergo these processes depend on liquids successfully wetting-out and spreading uniformly onto a surface.

Analyzing drop shape using contact angle is a powerful surface characterization tool for product development teams and manufacturers, allowing them to understand the material surface prior to an adhesion process such as coating, sealing, soldering, adhesive bonding, printing or painting.

Contact angles provide quantitative data about the cleanliness and surface composition at a molecular level.

Sources of contamination that can create a low-energy surface include oils, silicones, greases, or most things that might be in a manufacturing environment and potentially find their way onto a material surface. These contaminants can be detrimental to the adhesion processes and must be detected and controlled to control product quality and consistency.

The most common approach for contact angle measurements is the sessile drop method, whereby the contact angle is estimated by averaging the contact angle of two diametrically opposed points on a sessile drop. These angles are generally measured either directly by constructing a tangent to the drop at the three-phase point, or indirectly by drop shape analysis. Obtaining precision and accuracy with this method requires a flat, smooth, horizontal surface and a uniformly round drop.

A benchtop contact angle goniometer (sometimes known as an optical tensiometer) is a commonly used laboratory instrument for measuring contact angles. Advanced handheld and automated contact angle meters (like the Surface Analyst family of products) are also usable in a manufacturing operation for routine processes and quality control on actual parts as they proceed through production processes to predict adhesion outcomes.

For product development teams and manufacturers of products that must be bonded, sealed, coated, cleaned or painted, measuring methods that provide process control parameters are critical. A rapid contact angle meter that quantifies surface wetting properties can be an excellent way to monitor critical adhesion and cleaning processes.

Contact angle measurements are affected by surface roughness; the effect depends on the abruptness of the microscopic features. Smoothly undulating surfaces as well as typical machined or polished finishes have little or no effect on contact angle measurements. Very rough surfaces such as those created by sandblasting or other abrasive processes will show a greater effect. In all cases, as long as one is comparing surfaces of similar roughness, it is the chemical composition of the surface that has the greatest effect on contact angles.

The effect of surface roughness on contact angles is greater when using traditional contact angle measuring tools that utilize a syringe, a pump, or a ‘liquid needle’ to deposit the liquid. Ballistic Drop Deposition™ where the drop is printed on the surface from a pulsed stream of microdroplets provides a significant advantage due to the kinetic energy imparted to the liquid drop during the deposition process. The individual droplet impacts cause the drop perimeter to advance over any surface asperities. The drop then recedes slightly in the inter-impact period due to liquid surface tension. This repeated advancing and receding of the drop perimeter during growth greatly reduces the tendency for the drop perimeter to be pinned by surface roughness. This creates particularly round drops whose contact angles can be measured much more accurately. Because of this, contact angles measured using the Surface Analyst are much less sensitive to surface roughness and provide accurate, reliable contact angle measurements on almost any surface.

To read more about surface roughness and contact angle measurements, read this article, “Is Roughness as Important as Surface Cleanliness to Adhesion?”

The Surface Analyst technology uses an innovative approach to depositing the droplet of water and measuring contact angle that overcomes the variability that is often found in manufacturing environments.

By constructing a drop of highly purified water in this unique manner and measuring the drop top-down, the Surface Analyst is able to take measurements on a variety of surface angles—vertical, horizontal, convex and concave—as well as different surface finishes--smooth, textured and rough.

To learn more about the best ways to utilize water contact angle measurements in your process, download our eBook: Predictable Adhesion in Manufacturing Through Process Verification 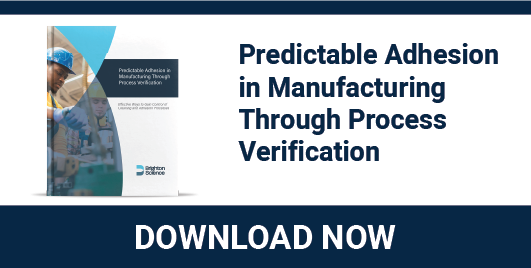